If you don’t know the French film, you’ve likely seen its iconic imagery: In the 1902 silent movie A Trip to the Moon, a rocket smashes into the eye of the Man in the Moon.

Bill Gray, who tracks objects in near-moon orbits for asteroid hunters in his spare time, recently noticed a four-ton rocket booster on a collision course with the far side of the moon. It’s expected to make landfall on March 4 and will be the first-known space junk to unintentionally crash into the moon.

Traveling at an estimated 3.3 miles per second, the hunk of metal, now believed to be left over from a 2014 Chinese lunar mission (Gray originally identified it as a SpaceX rocket booster), is expected to make a crater 65-feet long — about the size of a tractor-trailer, and smash into who-knows-how-many pieces. Though NASA and the European Space Agency weren’t monitoring the high-flying space junk — hardly anyone does — they have given credibility to the findings, confirming the crash forecast. The impact will happen at 7:26 a.m. EST.

China has denied ownership of the wayward rocket, saying the Chang’e-5 T1 debris burned up in Earth’s atmosphere.

It’s hard to not imagine the “moon man” wincing from the blow. Given that it won’t be the first time a rocket has slammed into his face — or that junk has scattered on the surface — perhaps he no longer flinches. But with humanity’s growing lunar ambitions, the question is how much moon destruction, contamination, and littering is acceptable to us.

“The public kind of gets it, but we haven’t yet seen thinking about this in terms of an environmental movement.”

“The public kind of gets it, but we haven’t yet seen thinking about this in terms of an environmental movement,” said Scott Shackelford, an Indiana University professor of business and ethics, working on a framework for addressing space junk. “The closest probably was Wall-E, and frankly, that’s pretty dated at this point. I would love to see more serious scholarly attention to build on how we avoid Wall-E.” (In the animated film, the robot Wall-E spends centuries collecting garbage in a dystopian Earth wasteland.) 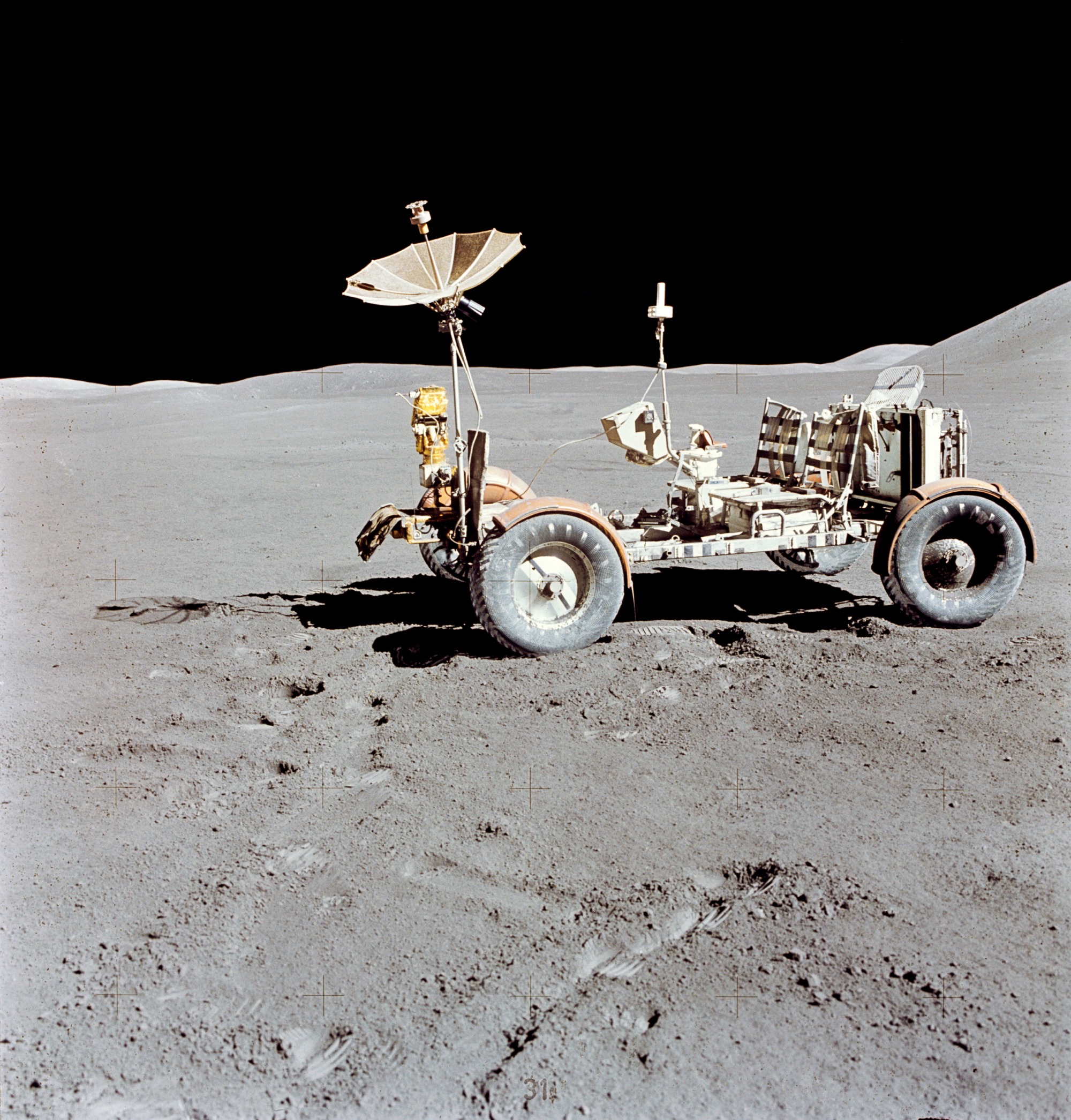 Apollo-era lunar roving vehicles are among the 800 known items humans have left on the moon, according to NASA.
Credit: NASA

Trash on the moon

Astronaut poop, scoops and tongs, moonquake experiments, a hammer, vomit bags, orbiters, cameras, mirrors, golf balls, cosmic ray detectors, shoes, roving vehicles, and $2 bills: In 2012, NASA published an inventory of about 800 items the agency knows were discarded or installed on the moon. The purpose wasn’t to take accountability for the U.S. mess, per se, but to keep a log of the items sprawled on the moon so they can be preserved.

That’s right: Neil Armstrong and Buzz Aldrin’s poop are historical artifacts. Some even consider them science.

The moon hasn’t been pristine for 70 years. Nations that have reached the far-flung destination have left their share of litter and blemishes, whether to lighten the load for the trip home or conduct research. Even Israel’s failed Beresheet landing three years ago left its mark, spilling dehydrated tardigrades, aka microscopic “water bears,” among its crashed cargo. 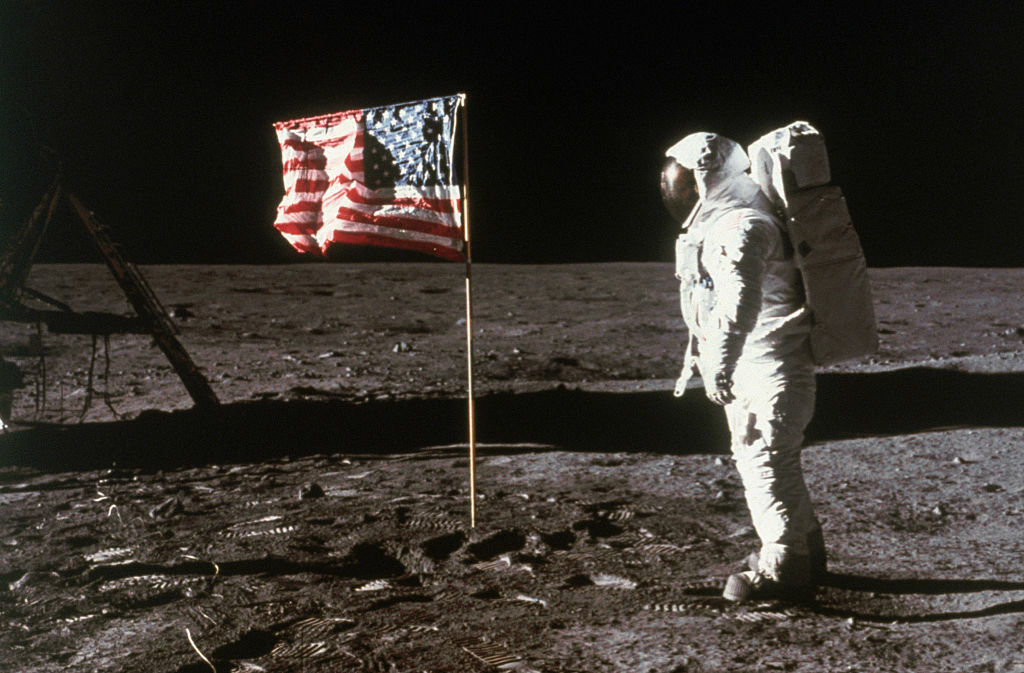 Discarded stuff is an inevitable part of space exploration.

“I don’t have a big problem with us leaving stuff on the moon,” said Jonathan McDowell, an astronomer at the Harvard-Smithsonian Center for Astrophysics.

His attention is on how such deep space junk could potentially impact humans and tamper with their interests, like science experiments running on the moon. Right now there isn’t a lot of lunar clutter compared to what’s circling Earth. But in 30 years, McDowell envisions moon bases and, thus, more traffic for lunar missions. That’s when garbage or errant collisions could become a serious problem, he said.

And few are watching.

The rocket on course to hit the moon

Gray, the independent astronomer who discovered the rocket’s moon-bound trajectory, is rooting for the hit. On his website, Projectpluto.com, he mused that scientists could learn from it. And, after all, if a rocket crashes into the moon, it’s not a threat to Earth.

The rocket, launched about eight years ago, is one of many left in a “chaotic” orbit, meaning its cosmic track could change in a mathematically unpredictable way. When rockets are in low-Earth orbit, not far above many satellites, they’ll stay there with a possibility to re-enter Earth’s atmosphere. If a rocket is sent farther out to a roomy orbit around the sun, on the other hand, it’ll essentially be “lost forever,” McDowell said.

An Israeli man reacts after the Beresheet spacecraft fails to land safely on the moon on April 11, 2019, in Tel Aviv, Israel.
Credit: Amir Levy / Getty Images

But if it’s dropped off in that intermediate zone between them, still orbiting Earth but far enough to get an occasional tug from the moon’s gravity, that could lead to several possible outcomes: The debris could fall back to Earth, get spit out into orbit around the sun, or bombard the moon.

Based on outer space policies and agreements, leaving a rocket in this unpredictable state — and not keeping tabs on its whereabouts — isn’t a crime.

“This is not a booboo, just to be clear. At least, not by current standards,” McDowell said. “There’s a different question of whether it should be considered a booboo. But by current sorts of best practices, it’s fine to leave your rocket in this sort of intermediate orbit.”

The European Space Agency thinks the impending crash highlights the need for policy, not just for the space around Earth, but also the moon.

It would take international consensus to establish effective regulations, but Europe can certainly lead the way,” said Holger Krag, head of the agency’s space safety program, in a written statement.

That issue — of little oversight and accountability for space junk — is at the heart of Shackelford’s research, though he’s focused on objects closer to the planet. Since the 1980s, major space treaties have stalled. He and Jean-Frédéric Morin, professor at Université Laval in Québec, and Eytan Tepper, a Laval space governance professor, have proposed a framework to regulate debris in space. It’s a type of astro-environmentalism.

Astro-environmentalism is an outgrowth of the centuries-old green movement. It’s the idea that development in space should meet the needs of current generations without inhibiting the development goals of future generations.

At Indiana University, Shackelford is executive director of the Ostrom Workshop, which uses Nobel Prize-winning economist Elinor Ostrom’s theories on the governance of common resources to address problems. Rather than resort to top-down government control or private ownership, in so-called “polycentric governance” various groups come together to manage resources. 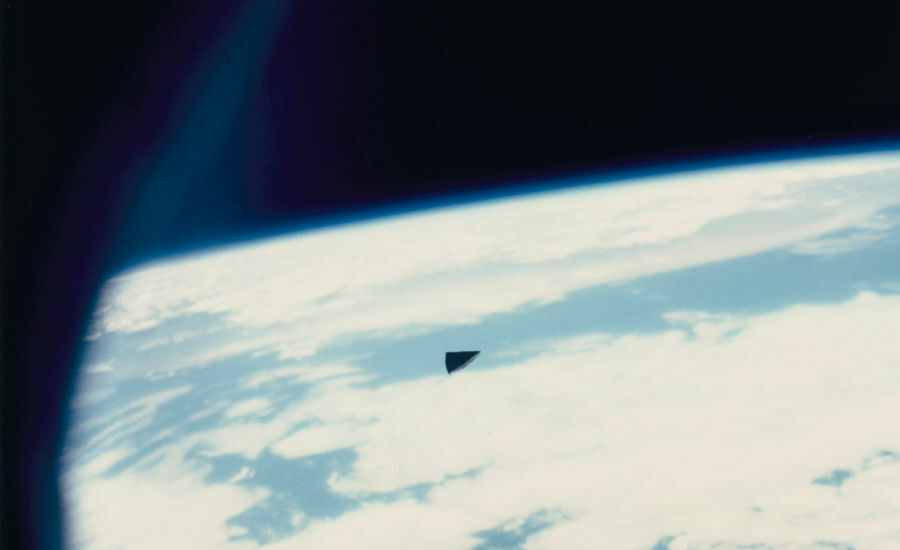 The Department of Defense tracks about 27,000 artificial objects near Earth that are 4 inches or larger, but many smaller pieces can’t be detected.
Credit: Philipp Igumnov / Getty Images

Real-life examples of polycentric governance are the Paris Agreement on climate change and the Arctic Council, an intergovernmental forum on Antarctica. Even the approach to the COVID-19 pandemic, though imperfect, demonstrates how local, state, and national government, along with the public and academia, can coordinate on widespread issues.

Through the workshop, Shackelford and his colleagues think they can make progress on a sizable space junk problem. The Department of Defense tracks about 27,000 artificial objects near Earth that are 4 inches or larger, but many smaller pieces can’t be detected. NASA has estimated there are about 500,000 marble-size objects that aren’t monitored.

That’s worrisome. Tiny flecks of garbage, like a screw zooming at 15,700 mph, can endanger satellites, spacecraft, and astronauts. Recent debris storms, such as when the International Space Station had to move to avoid junk from a blown-up Russian satellite, have highlighted the problem.

“The clock is ticking.”

Shackelford’s group completed the first step in their project: building a database of over 1,500 international space actors, including nations, institutions, and private companies that own or operate objects in orbit. From there, they will determine which parties are the most active and influential, and how they’re interconnected.

“Then you can figure if you get this group at the table, you can really make things happen pretty quick, even in such a complex system like this one, and even if we can’t get consensus through the UN,” he said.

The workshop will be hosting a space governance policy lab to work with non-governmental organizations and companies that want to address these astro-environmental problems. Part of that process will be looking at codes of conduct and a mechanism for graduated sanctions against bad actors.

“When I first started working on this stuff almost 20 years ago now, this was pretty far-out stuff,” Shackelford said, “The clock is ticking. And generally, the international community doesn’t do a great job of acting on amorphous deadlines.”

Space experts emphasize when the rocket goes rogue Friday, it won’t be the first human-made object to leave a lunar dent. NASA deliberately targeted Apollo-era rockets at the moon to create moonquakes for surface seismometers to measure. More recently in 2006, ESA’s Smart-1 spacecraft finished its science mission, then intentionally crashed into the moon so scientists could study the event like a controlled meteoroid impact. In 2009, NASA crashed its LCROSS mission into the moon, revealing water in the debris plume.

And some even think this upcoming crash won’t be the first accidental crater — just the first people are aware of. Between the 1960s and 1980s, about 50 human-made objects were left in chaotic orbits, McDowell said. The asteroid-monitoring surveys haven’t spotted them for decades.

“If I had to put money on it,” McDowell said, “I’d guess probably five or six of them hit the moon, and we just don’t know about it.”