That’s the number of photos taken around the world on iPhones just last year, according to Apple. The company announced that milestone at its latest Apple Event just earlier this week.

While many marveled over that number, all I could think of was “damn, that’s going to require a lot of storage.” And that’s where Apple is lacking.

It’s the year 2022 and Apple is still offering a maximum iCloud+ storage plan of 2TB. It doesn’t make any sense. 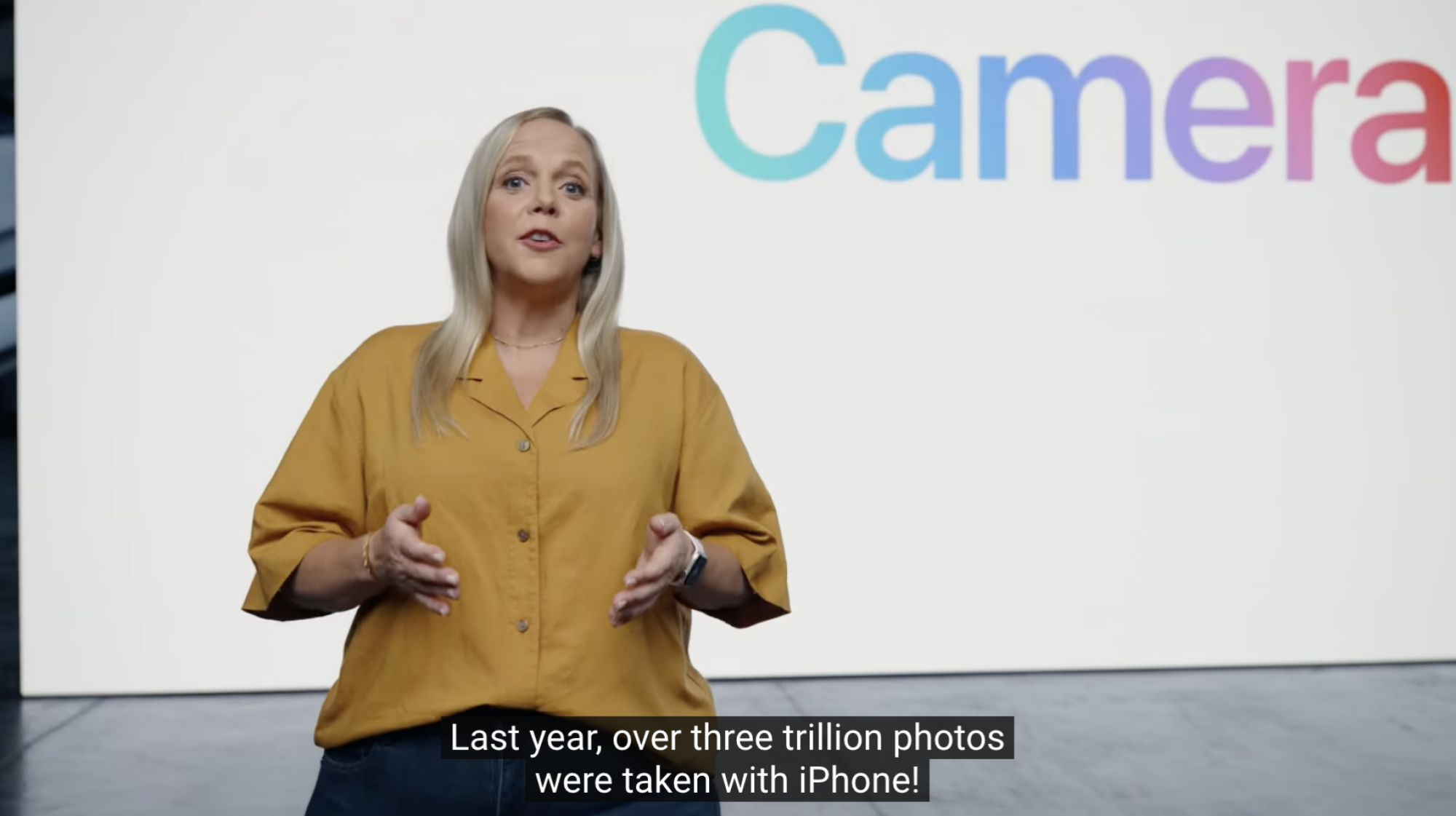 Every year that Apple announces a new iPhone, a major focus is the upgrade in camera hardware offering major improvements on photo and video quality. That means better pictures. It also means larger files. According to Apple itself, a single minute of 4K video recorded on an iPhone can take up as much as 400mb of space. This year, the company put major focus on the new iPhone 14 Pro’s insane 48mp camera at its Apple event. One photo taken with this iPhone camera, in the high quality ProRAW format, can be around 75MB.

You’re going to fill up your measly 2TB iCloud storage plan mighty quickly with photos and videos of that size. What does Apple want you to do then?

The latest Apple Event proves once and for all that 2TB is simply not enough,

It’s unclear why Apple doesn’t offer an iCloud+ storage plan larger than 2TB. Seems like an easy thing to do! More money for Apple, right? The company offers much, much smaller storage options. All iCloud users are offered 5GB (lol) for free. There’s upgrade options at 99 cents per month for 50GB and $2.99 per month for 200GB. Then of course there’s the largest plan at $9.99 per month for 2TB.

“You already have the largest iCloud+ plan available,” reads the iCloud settings once you look at the upgrade options page when you have the 2TB plan. 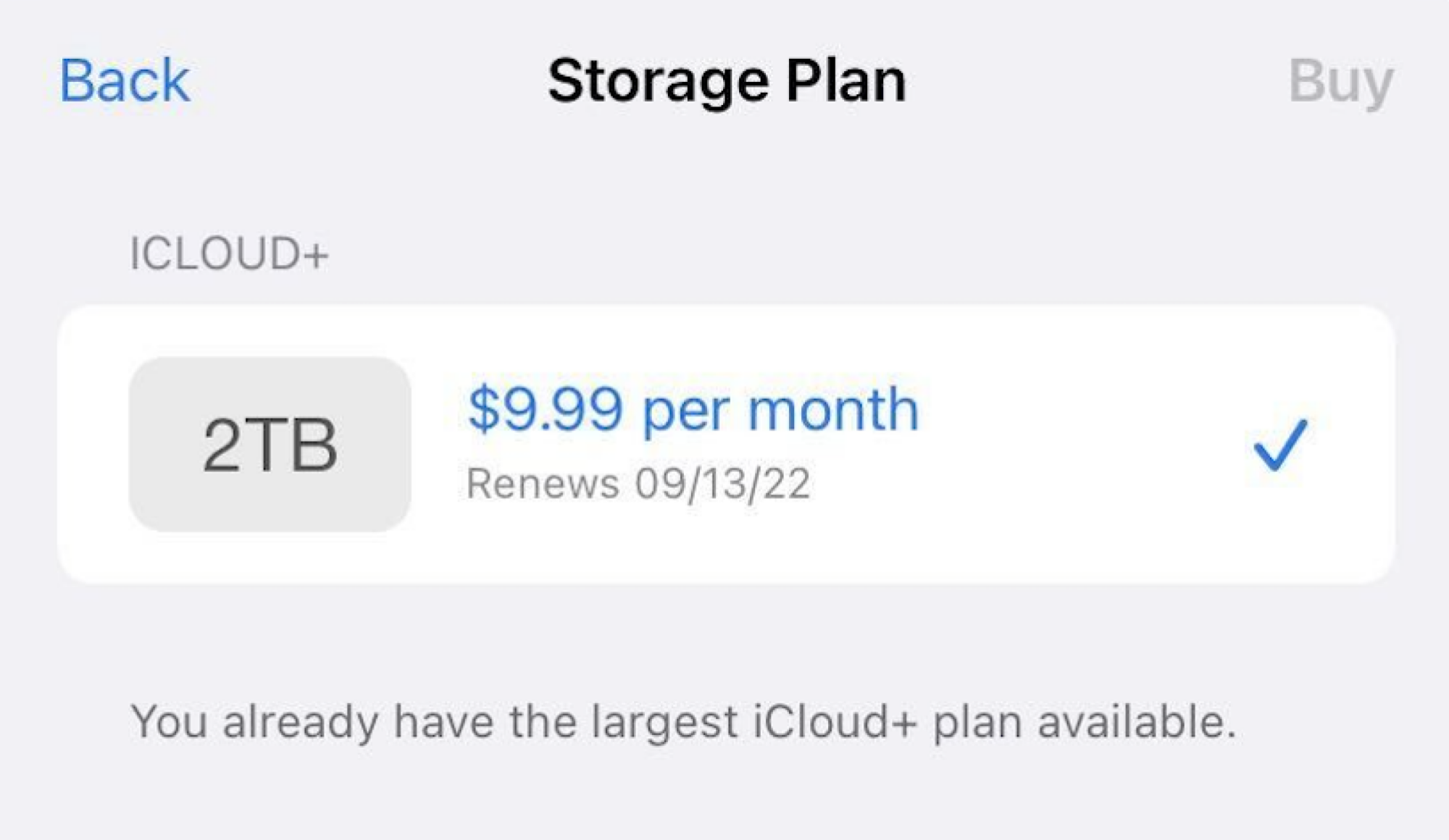 One may argue that most users probably won’t need 2TB of cloud storage for their photos. Perhaps that may be the case for a while. But, again, more than 3 trillion iPhone photos in 365 days. People are taking more photos than ever before. And that doesn’t even count videos! If you’re a lifetime iPhone user, many will definitely max out that 2TB of storage eventually.

Also, Apple itself markets the iPhone to users beyond the “average” iPhone consumer too. At recent Apple Events, the company frequently lauds how the iPhone can be used by professional filmmakers and photographers because the device can create high quality media, which in turn means large files.

And, remember, that storage space is for everything, not just your iPhone photos and videos. Your music and movies, documents and other files, app data, your iCloud backups all count towards your iCloud storage. If you’re a Mac user as well, Apple encourages you to connect your iCloud drive to your laptop or desktop computer and share that whole 2TB of iCloud storage space with those devices too. Insanity!

Much of the advice one would find online when they max out their iCloud+ storage is to simply move older media off iCloud and to physical storage space. Sure, that’s one solution. Those users would also have to give up the other selling point for iCloud+ and that’s the software Apple uses to highlight photos and memories on iCloud.

But, even if losing that isn’t a dealbreaker, this will convolute things for the average iPhone user. And that’s because users should be storing their photos on a local, physical hard drive already anyway as a backup. Once they’re deleted from iCloud, those photos would still then need to be backed up on a second cloud or local storage location. Simply moving those photos off iCloud and on to a hard drive would mean a backup of those files wouldn’t exist.

The workaround (but it sucks)

There is a workaround that lets you upgrade the maximum iCloud+ 2TB plan to 4TB of storage: Sign up for Apple One, Apple’s bundled subscription solution.

By signing up for Apple One’s biggest plan, Premium, iPhone users can get 2TB of iCloud + storage and also get access to Apple Music, Apple TV+, Apple Arcade, Apple News+, and Apple Fitness+. Subscribe to that on top of your standalone iCloud+ 2TB plan and users can double their storage to 4TB.

But, here’s the problem with that. Subscribing to Apple Premium Plus costs $29.95 per month. And if you want that 4TB total, users will also need to keep paying for that $9.99 iCloud+ plan. So, basically, to simply double your 2TB of storage, you have to pay 4 times the price. 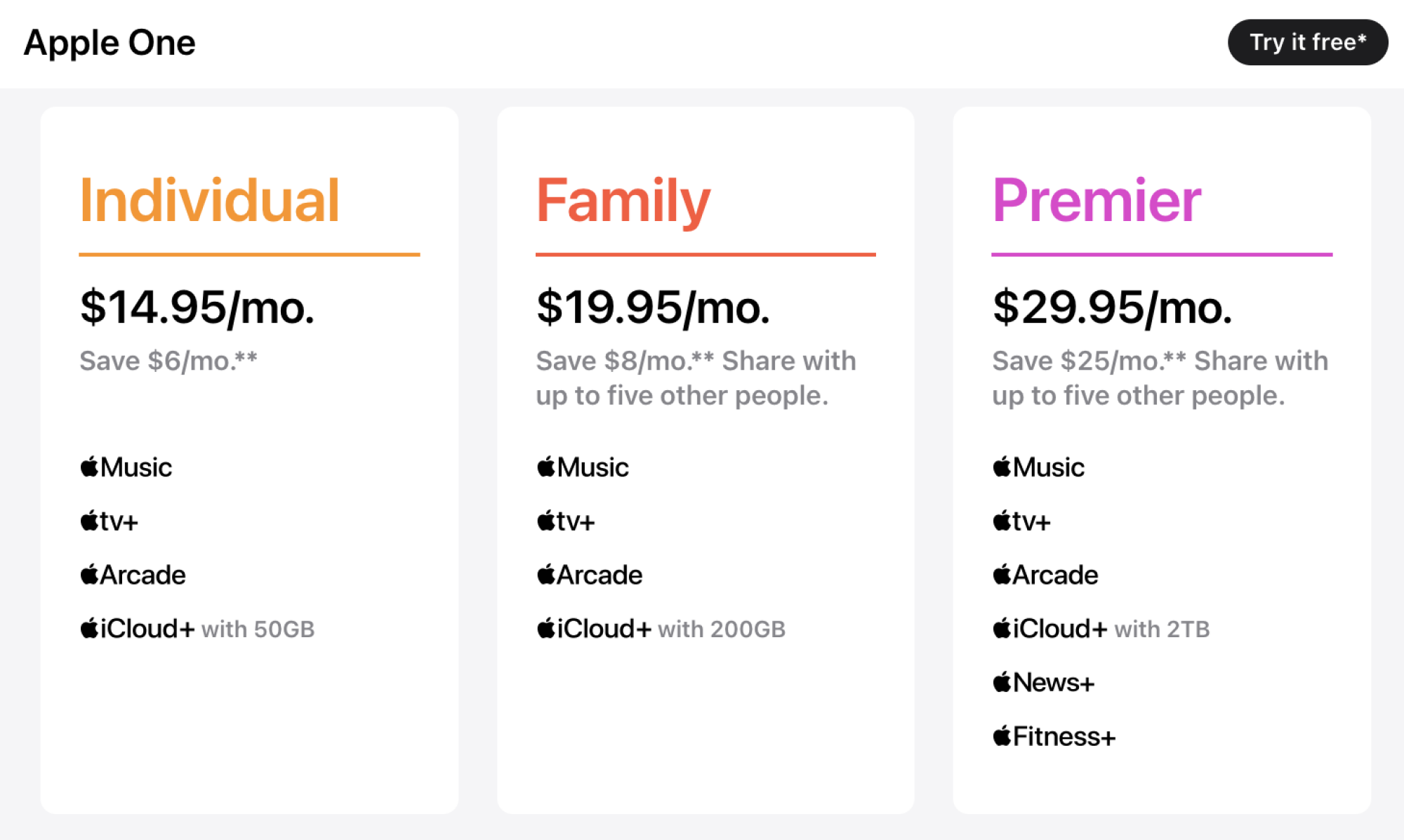 Let’s compare this workaround to a similar service from Google, Apple’s biggest smartphone competitor. Google calls their storage service, interestingly, Google One. A Google One plan provides storage shareable among a user’s Gmail, Google Photos, and Google Drive. Android users can even backup their devices. It’s pretty much just like iCloud+ based on the offerings. Even the plans are nearly identical: $1.99 per month for 100GB, $2.99 per month for 200GB, and $9.99 for 2TB.

But here’s the thing: Google One doesn’t max out at 2TB. There are large plans available (with the largest going all the way to 30TB!). But let’s just look at the next plan up after the 2TB one.

So, in short, while there is a workaround for more than 2TB of iCloud+ storage, Apple’s math doesn’t add up.

Will Apple eventually offer iCloud+ plans larger than 2TB, and at price points that make sense? It seems likely. But the fact that they still haven’t is mind-boggling, especially as they continue to upgrade their iPhones to produce higher quality media that use up more and more storage space.