At least that’s what scientists thought until the European Space Agency (ESA) got a better look at the “rugby ball shaped” WASP-103b. Discovered in 2014 amid the constellation of Hercules, this news-making gas giant is twice the size of Jupiter and slightly less than 1.5 times its mass.

Astronomers measured WASP-103b and other exoplanets extensively during the ESA’s “Cheops” mission (CHaracterising ExOPlanet Satellite), which launched in late 2019 and began observations in spring 2020. The agency published its findings, which rely on data previously obtained by the NASA/ESA Hubble Space Telescope and NASA’s Spitzer Space Telescope, on Tuesday.

“Cheops measures exoplanet transits – the dip in light caused when a planet passes in front of its star from our point of view,” explains an official writeup for the ESA.

“Ordinarily, studying the shape of the light curve will reveal details about the planet such as its size. The high precision of Cheops together with its pointing flexibility, which enables the satellite to return to a target and to observe multiple transits, has allowed astronomers to detect the minute signal of the [deformation] of WASP-103b.” 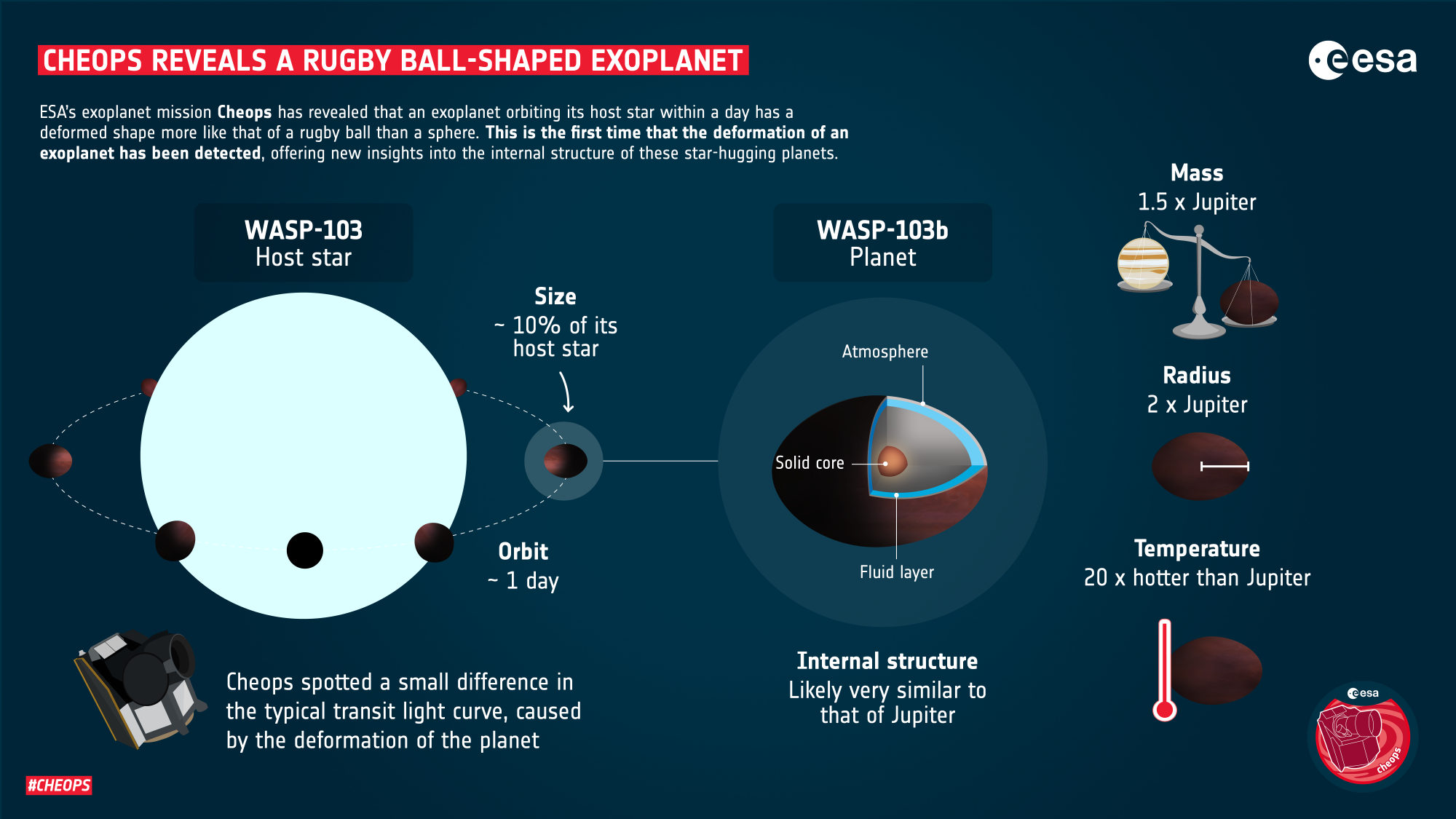 Researchers previously suspected WASP-103b had a high potential for deformation, given the exoplanet’s proximity to its sun. Its orbit around host star WASP-103 completes an entire revolution in less than one Earth day. This makes its tides especially strong, effectively reshaping WASP-103b’s mass. The bizarre oval exoplanet can theoretically tell us more about worlds like it and how they’re formed.

“The resistance of a material to being deformed depends on its composition,” says lead author of the research Susana Barros, also via the ESA. “For example, here on Earth we have tides due to the moon and the sun but we can only see tides in the oceans. The rocky part doesn’t move that much. By measuring how much the planet is deformed we can tell how much of it is rocky, gaseous, or water.”

The composition of WASP-103b is of particular interest for two primary reasons. First, the exoplanet appears to be unusually bloated, which could tell us more about gas giants and their behavior.

“In principle we would expect a planet with 1.5 times the mass of the Jupiter to be roughly the same size, so WASP-103b must be very inflated due to heating from its star and maybe other mechanisms,” Barros explains. For reference, WASP-103b is approximately 20 times as hot as Jupiter.

Second, strong tides impact “orbital decay.” That’s the gradual decrease of distance between stellar bodies. Based on stellar physics, WASP-103b should theoretically be inching ever-closer to the larger WASP-103, eventually colliding with and becoming engulfed by its host star. But the ESA has detected WASP-103b doing the opposite, slowly moving further away from WASP-103.

Scientists posit a number of explanations for the baffling behavior, including the underwhelming reality that the data may simply be wrong. (We’re investigating space here; it’s new territory!) More data is needed. So the James Webb Space Telescope, which launched Christmas Day and uses powerful infrared technology, is on its way to assist. Cheops will continue to gather data as new observations and theories are made.

Research co-author Jacques Laskar concludes, “This study is an excellent example of the very diverse questions that exoplanet scientists are able to tackle with Cheops, illustrating the importance of [its] flexible follow-up mission.”