When you want an electric car, but price is a dealbreaker, U.S. News & World Report only recommends hybrids.

Late Wednesday night, U.S. News released its 2022 list and for the two categories, “Best hybrid and electric car and SUV for the money,” Hyundai Elantra Hybrid and Hyundai Tucson Hybrid, respectively, were revealed as the winners. Those were the only EV-eligible categories. 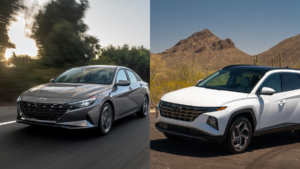 Hyundai secured its place on the list with gas-electric hybrids that don’t need to be plugged in (like a Toyota Prius). The Elantra is a $23,750 sedan, while the Tucson starts at $29,200 for the hybrid SUV. The Tucson does come as a plug-in hybrid version for $34,750 with 33 miles of pure electric range. A U.S. News spokesperson said both the plug-in and gas-only hybrid are considered winners.

The hybrids monopolized the two EV categories, leaving pure battery-powered options in the dust. Hyundai’s true EVs didn’t make the list even though the Korean automaker has the Ioniq and Kona as fully battery-powered options. The Ioniq has 170-mile range for a $33,245 starting price. The Kona electric is more competitive with over 255-mile range and $34,000 starting price.

Last year’s EV category winners were both from Toyota and also gas-electric hybrids: the RAV4 and Corolla Hybrid. Companies that only make EVs do tend to have higher starting prices, like Tesla, Polestar, Lucid, or Rivian with its electric truck that starts at $67,000. Tesla’s most affordable car is the Model 3, which starts at $44,990 for about 267 miles of pure electric range.

Hyundai, Toyota, and other legacy auto brands like General Motors have more affordable electric options and more hybrid offerings. The battery-powered Chevy Bolt EV starts at $31,500. The OG hybrid, the Toyota Prius, starts at about $25,000.

The winners were based on quality and value from the U.S. News Best Car rankings that takes in safety and reliability data and reviews about performance and the interior. To determine value, the researchers looked at the five-year cost of ownership and sale prices.