If the word “XtremeX” doesn’t come to mind when you think of an e-scooter, think again, people!!

Segway has unveiled a new souped-up electric scooter that can get up to 43.5 mph and accelerate to 30 mph in 4.2 seconds flat. For context, that’s really freaking fast: The maximum allowed e-scooter speed from rentals like Bird or Spin on the streets of Los Angeles is 15 mph. So this is nearly triple what you’re probably used to feeling on an e-scooter.

The gnarly new beast is Segway’s GT2, which the company debuted at an event in Southern California Wednesday that will retail for — gulp — $3,999 when it’s released this summer. It’s apparently so fast and rugged that you can even do a wheelie on it, or jump down a flight of stairs and land like a damn Charlie’s Angel. That is, at least, according to a promotional video. Extreme! 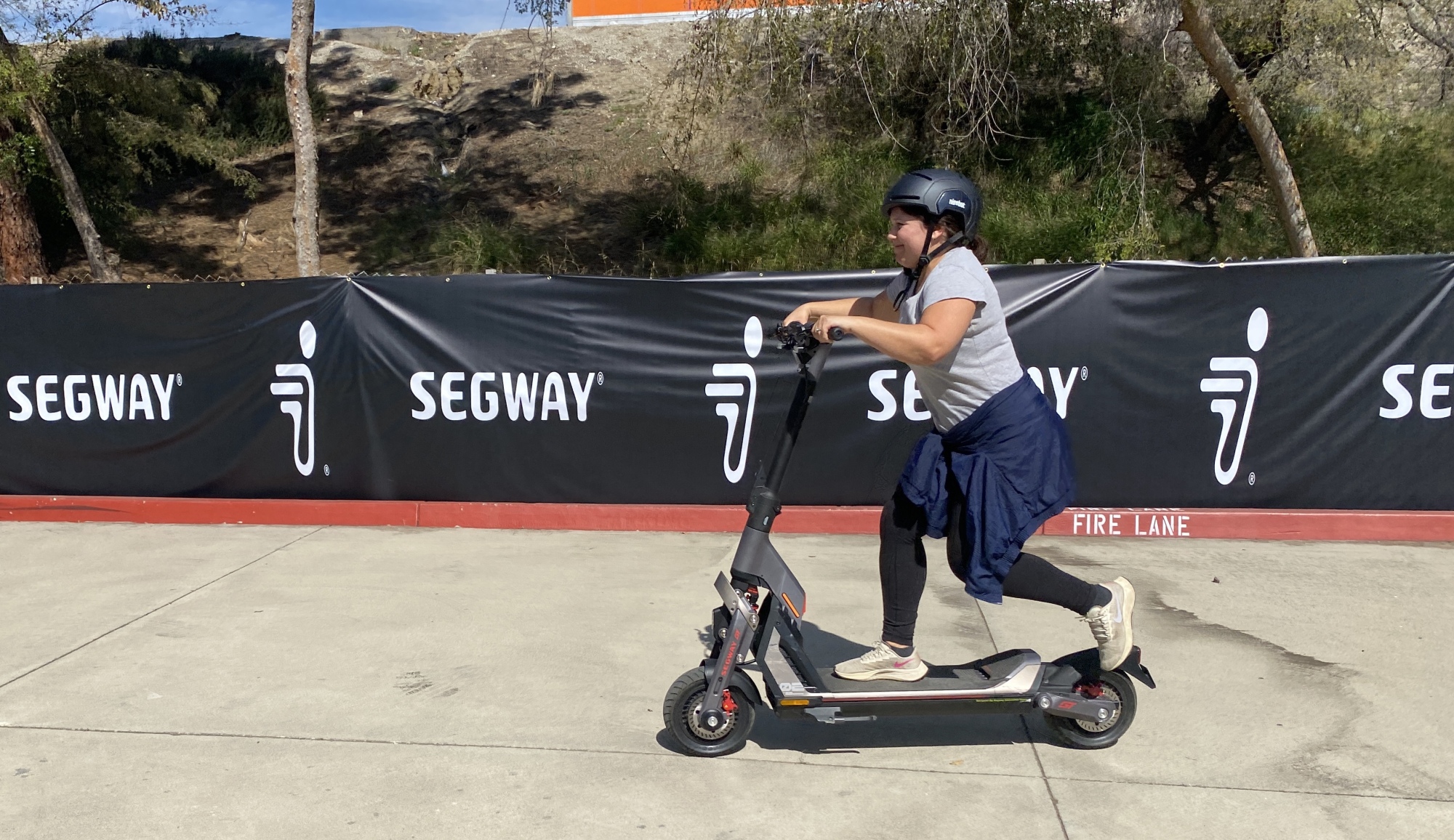 Some serious power and heft are required to pull off those feats. It has a 1500-watt motor and the 11-inch wheels are supported by air shock absorption with front and rear spring suspension and adjustable damping. That makes the GT2 clock in at over 114 pounds. Most Bird and Lime e-scooters scattered on city sidewalks are only about 45 pounds — a difference I really felt when I tried to pick it up to turn the front around and, embarrassingly, couldn’t lift it.

The GT2 was just one of a handful of new products Segway-Ninebot announced Wednesday. Others included the slightly less fast but still impressive GT1 (which has a maximum speed of 37.3 mph) and two new city-oriented e-scooters called the “P Series,” which are successors to Segway’s best-selling G30 series. There’s also a cute ‘n’ fast moped called the E110A, and a footboard attachment called the “Shredder Kit” which basically turns a Ninebot stand-up scooter into a (very large) electric skateboard.

Segway head Alex Huang Chen at Wednesday’s event described the GT2 as akin to the “Formula 1” car of the scooter world. The company’s overall mission is to “simplify the movement of people and objects,” and it focuses heavily on reducing a person’s environmental impact by making an array of electric transportation options. But the GT2 is more of a hook for people with a wild side.

“GT is not for everyone,” Huang Chen said. “It’s for riders who want the speed, the wild[ness], the dopamine. But, of course, safety first!” 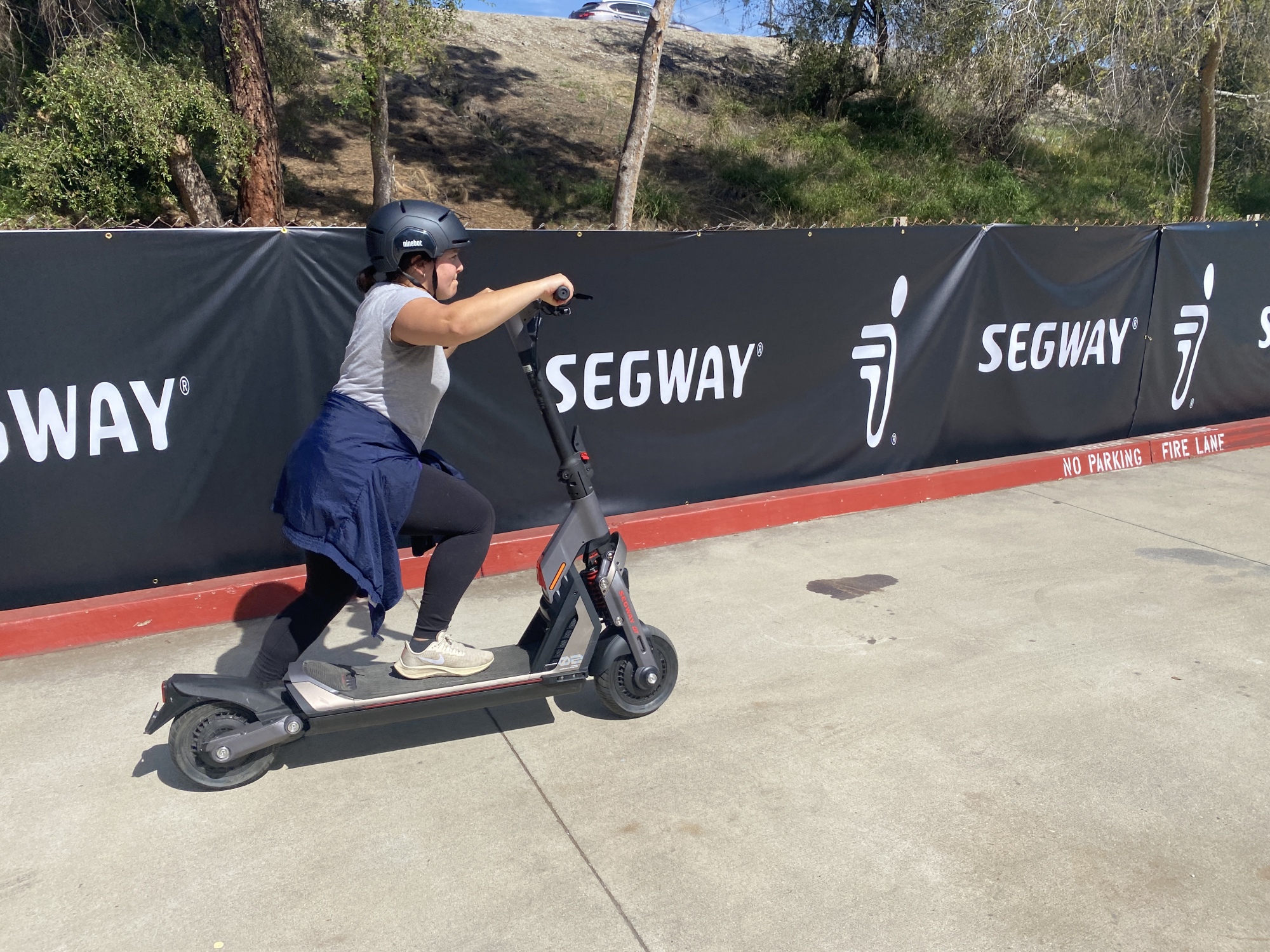 Kicking off on the GT2 required a lot of concentration.
Credit: Rachel Kraus / Mashable

Huang Chen means it when he says “safety first:” He momentarily stepped away from our interview to personally make sure a Segway rider playing with some of the products put on his helmet.

I got to try out the GT2, but sadly, only in its least speedy “eco-mode,” since the demo was in a relatively small parking lot. There are three other modes: city, country, and race. If you want to do tricks and reach maximum speeds, you’ll need to be in race mode. Even so, you need to kick off hard — like, really hard — to get the engine to kick into gear when you twist the throttle.

But then, you can feel the power under you. I’m sure I’ll be popping wheelies in no time.