When NASA astronauts next visit the moon, it’ll be a dark and shadowy expedition.

The space agency’s renewed moon ambitions, a mission called Artemis, aim to bring astronauts back to our well-cratered satellite later this decade. They’ll land in the South Pole, a place where the sun barely rises over the lunar hills. It’s a world of profoundly long shadows and dim environs.

NASA is preparing to train its future moon explorers in these eerie conditions. This week, the Johnson Space Center released an image of NASA divers simulating what astronauts will experience in the South Pole. The training is happening in the agency’s Neutral Buoyancy Laboratory in Houston, a huge pool (it’s 40 feet deep) designed to simulate conditions in lower gravity.

“As NASA prepares to send the first woman and the first person of color to the Moon’s South Pole as part of the Artemis program, divers at the Neutral Buoyancy Laboratory (NBL) in Houston are setting the stage for future Moonwalk training by simulating lunar lighting conditions,” Megan Dean, a NASA public affairs specialist, said over email. 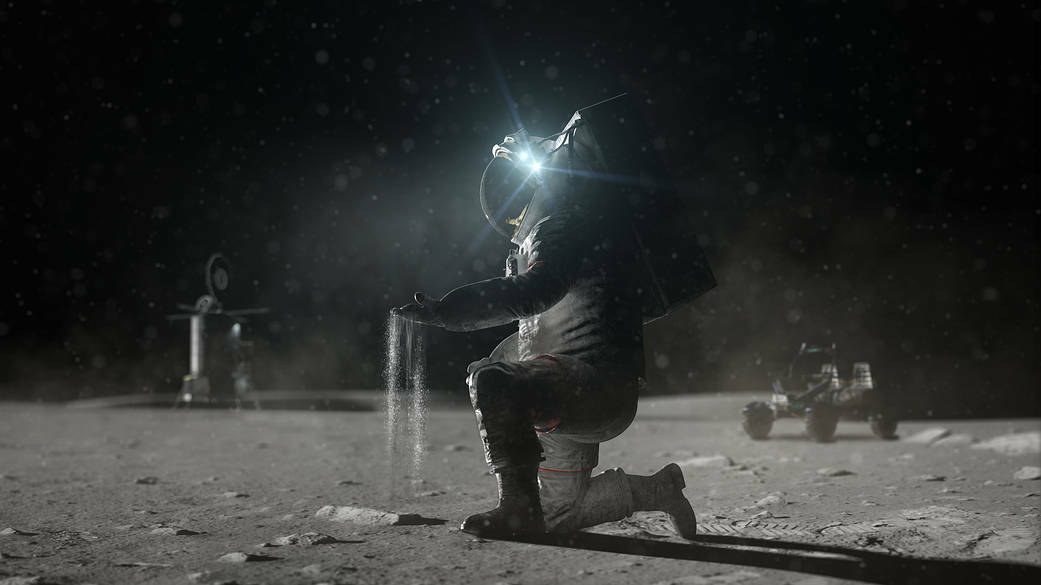 A conception of an astronaut on the moon
Credit: NASA

The Neutral Buoyancy Laboratory is often a brightly lit training space. But for this mission, they’ve made robust efforts to create darkness.

“This testing and evaluation involved turning off all the lights in the facility, installing black curtains on the pool walls to minimize reflections, and using a powerful underwater cinematic lamp, to get the conditions just right ahead of upcoming training for astronauts,” explained Dean.

The soil at the bottom of the pool is meant to mimic the chalky lunar ground. It’s mostly “common pool filter sand,” NASA noted, which pool owners use to catch dirt and other particulate matter.

When, exactly, might U.S. astronauts again step foot on the moon? NASA ambitiously plans to land a crew in the South Pole in 2025. First, they’ll have to successfully test the space agency’s new mega-rocket, called the Space Launch System, that may one day launch them back to the moon. The first test will happen no earlier than March 2022, NASA said.