I don’t know if I drove the first electric Mazda SUV as much as I charged it.

During my four days with the newly released MX-30 I feel like it was always plugged in. Perhaps because of its disappointingly small 35.5 kWh battery that offers about 100 miles of range. It’s an affordable EV starting at $33,470 (with $7,500 available in federal tax credits), but other under-$40,000 EVs have much better, bigger (some more than double the MX-30 capacity) batteries. The Hyundai Kona EV gets 258 miles on a single charge. Even the “low-range” Nissan Leaf squeaks in over 150 miles on a 40 kWh battery, and in my experience, those extra 50 miles are make-or-break when it comes to range anxiety.

I had driven the MX-30 late last year when it was first revealed for a few hours along the Southern California coast. But this was an opportunity to see what it’d be like to live with this car. Turns out, it doesn’t make sense, even as a second car for errands or quick jaunts. Within the dense Bay Area, a meeting in Silicon Valley can still be 50 miles away.

Every mile counts while in the MX-30. On a drive from San Francisco to Palo Alto (which is over 30 miles each way) I felt stressed enough to find public charging stations in Palo Alto and made an additional stop in San Mateo, to make sure I could get back to SF with enough juice to spare for a 16-mile drive I needed to take later that day. With such a small battery you are constantly calculating trip mileage. 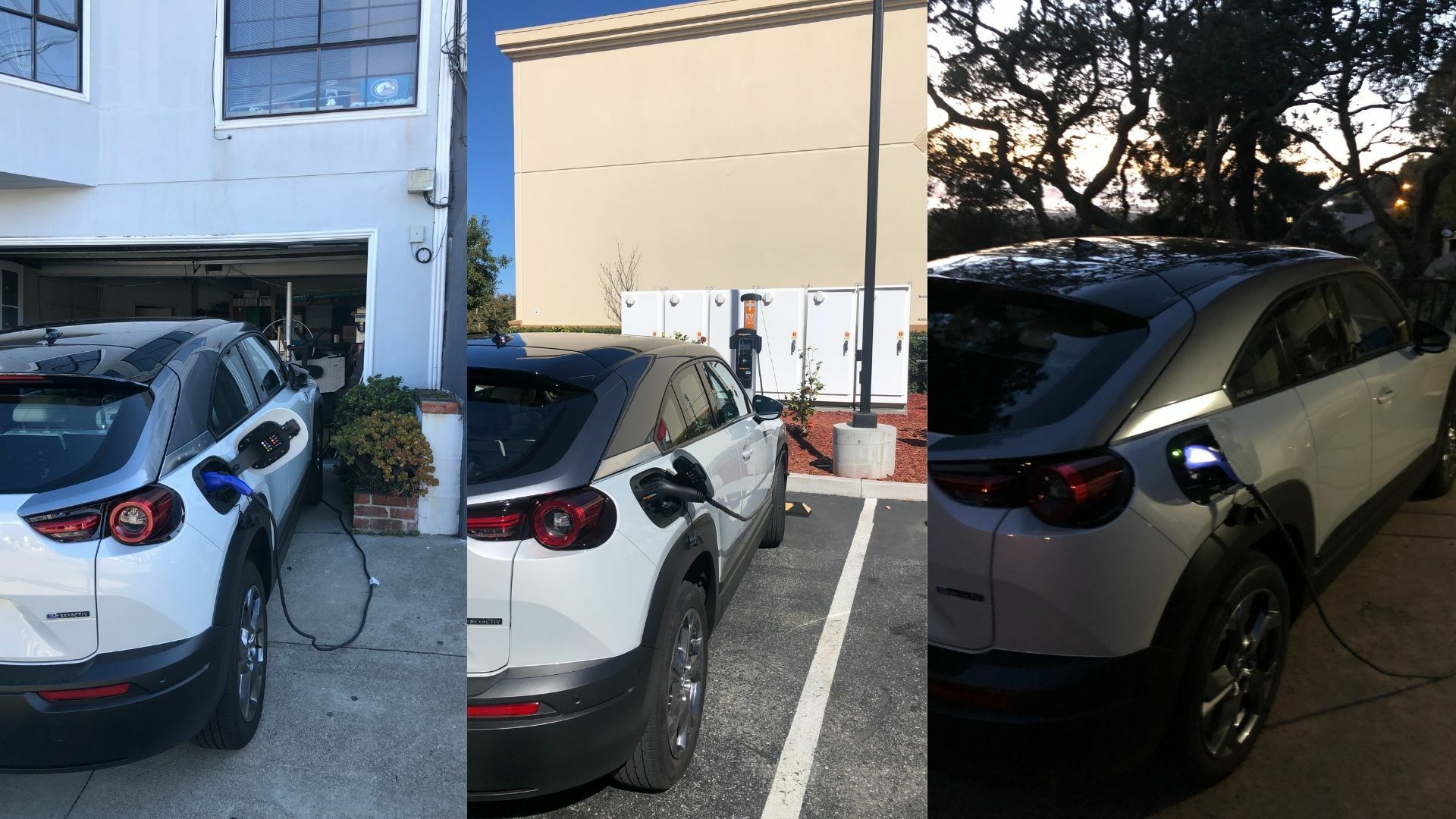 At home I only had access to Level 1 charging, the slowest charging speed available. To “refill” half the battery took more than 16 hours. At public charging stations like those on the ChargePoint or EVgo networks you’ll usually find Level 2 charging. That speeds up charging to full from empty in about six hours. It’s the fast-charging stations that are most helpful, like the Electrify America plugs. Those can get you to 80 percent charged in 20 minutes.

The MX-30 lacked the reassuring, tech-laden experience of most electric cars. It had an EV’s silent start, along with the telltale quick pick-up, and on-screen graphics that showed if I was generating or using power, so there was no doubt I was driving an electric car. But it didn’t offer different driving modes to maximize the battery or prioritize torque like most other EVs. I was also disappointed that I couldn’t turn on one-pedal driving, the mode where the brakes collect as much energy to “regenerate” the battery while stopping or slowing.

Aesthetically, the e-Mazda was a winner. With looks almost identical to its gas-powered CX-30 counterpart, it was a cute, rounded bubble of a compact SUV. 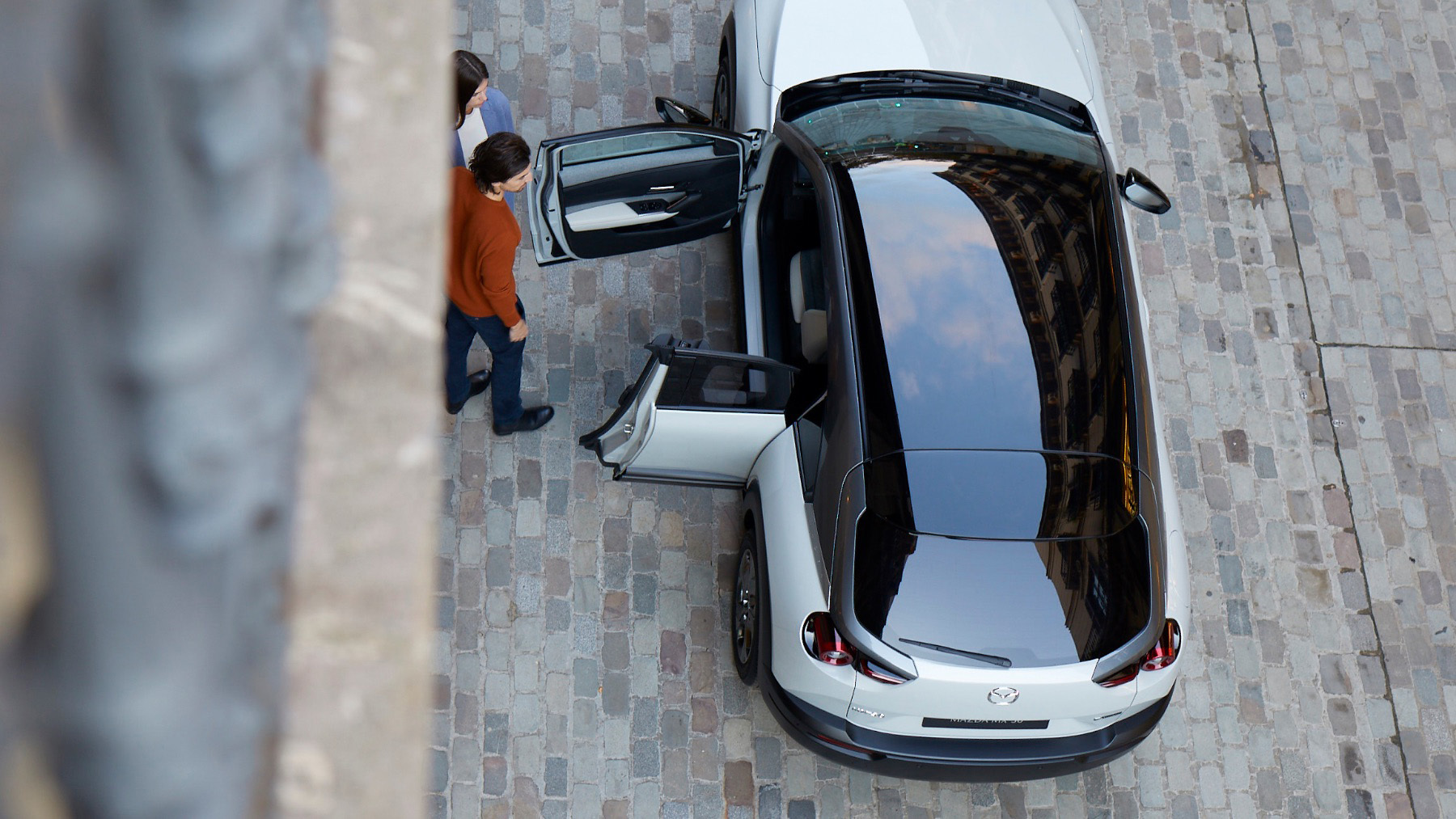 Inside it was a bit cramped, especially in the backseat with its suicide doors and no openable windows. The sun roof made it feel more spacious than it was for back-seat passengers. Even more disappointing was looking under the hood: no frunk! Mazda decided to leave gaping holes instead of a front trunk space. Bummer. 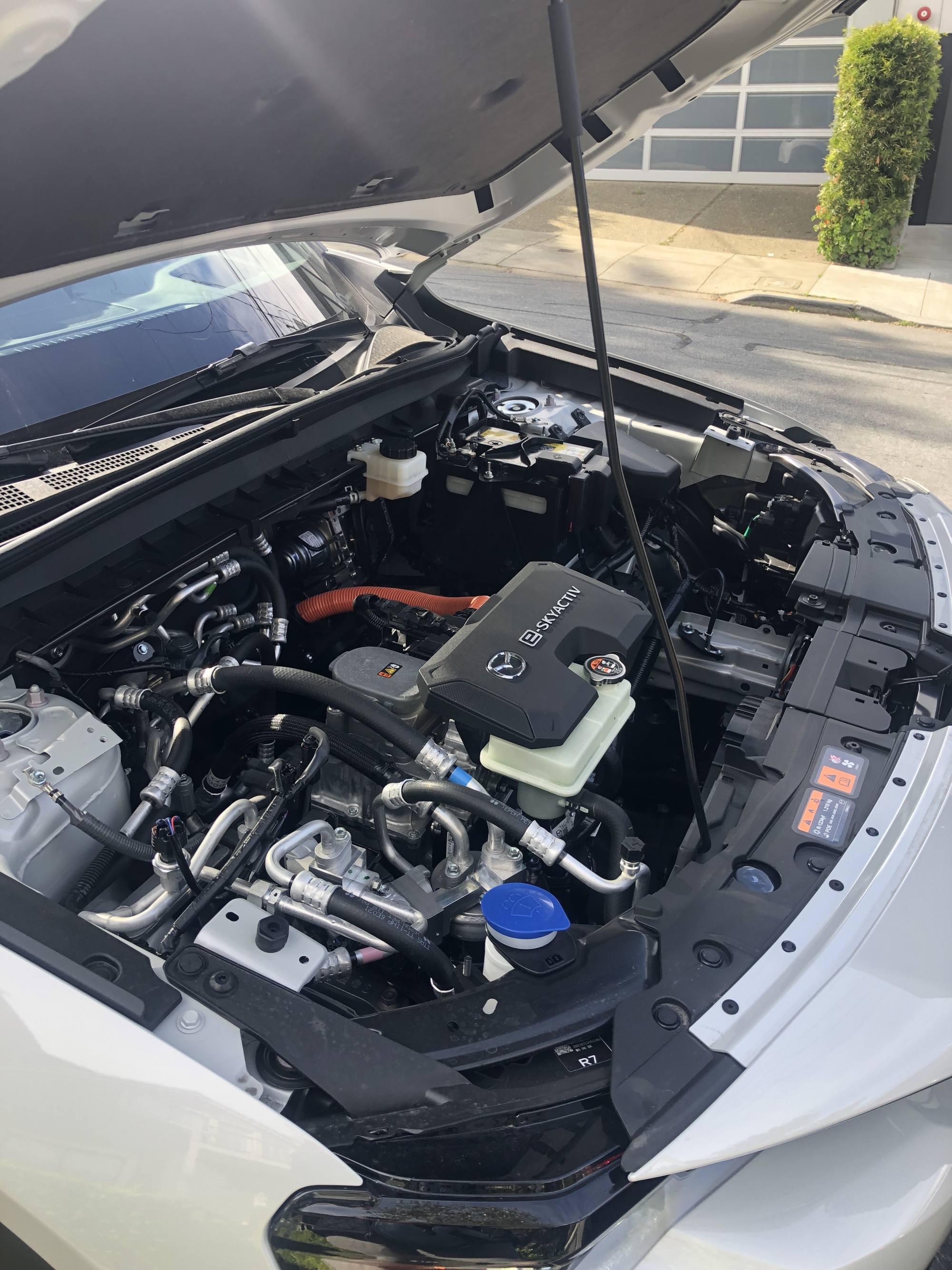 The MX-30 is an EV for Mazda to say it made an EV (and it’s only available in California with a limited initial production of 560 vehicles). The MX-30 will keep you waiting at charging stations so long you’ll be wishing for a real electric Mazda.