Apple isn’t the only tech giant gearing up for a big year: Samsung is supposedly introducing several new gadgets at its Feb. 9 Galaxy Unpacked event. It’s only confirmed an updated smartphone so far (“the most noteworthy S series ever created”), but leaks suggest we’ll also get our first glimpses of the rumored Galaxy Tab S8, S8 Plus, and S8 Ultra.

As if on cue, the current Samsung tablet just went up for sale at its lowest price to date. Head over to Amazon or Samsung.com to score a mid-level Galaxy Tab S7+ with 256GB of storage for only $729.99, which is a scrumptious $200 off its suggested retail price of $929.99. (For comparison’s sake, it was $840 at Target, $860 at Walmart, and sold out at Best Buy at the time of writing.)

Sporting a speedy octa-core processor, 8GB of RAM, and a glorious 12.4-inch Super AMOLED display, the Galaxy Tab S7+ is the upgraded version of our favorite Samsung tablet to date. (That would be the Galaxy Tab S7 — no “plus.”) Comparisons to Apple’s 2020 iPad Pro were abundant upon its release that fall, but just between us, the Galaxy Tab S7+’s S Pen gives it the edge. That stylus makes drawing, note-taking, and general multitasking a breeze, and unlike the $130 Apple Pencil, it’s included with the tablet at no extra cost. 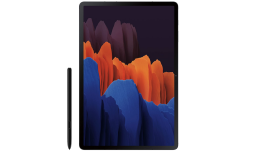