Raise your hand if you’ve been here before: You paid for internet service that either isn’t actually as fast as it’s supposed to be or deceptively costs more than the internet service provider (ISP) said it would.

I assume every single person reading this has their hand in the air because ISPs are generally not real fun to deal with. In this remote work era, home internet service has never been more important, but so often it can feel impossible to know what exactly you’re getting when you hand over a bunch of cash to have a signal pumped into your home. Sure, the ISP website says you’re paying for 300Mbps download speeds, but Speedtest tells a totally different story. (Note: Mashable and Speedtest are both owned by the same parent company, Ziff Davis)

Great news: Some of these problems will be things of the past thanks to a new FCC order issued in late January. By November 2022, ISPs will be required to provide “nutrition labels” for their services that tell consumers the real story instead of the sanitized marketing version. But since internet services don’t have calories or caffeine, it can be kind of hard to wrap your head around what exactly these labels will tell you.

Let’s dig into it.

What do these labels fix about home internet service? 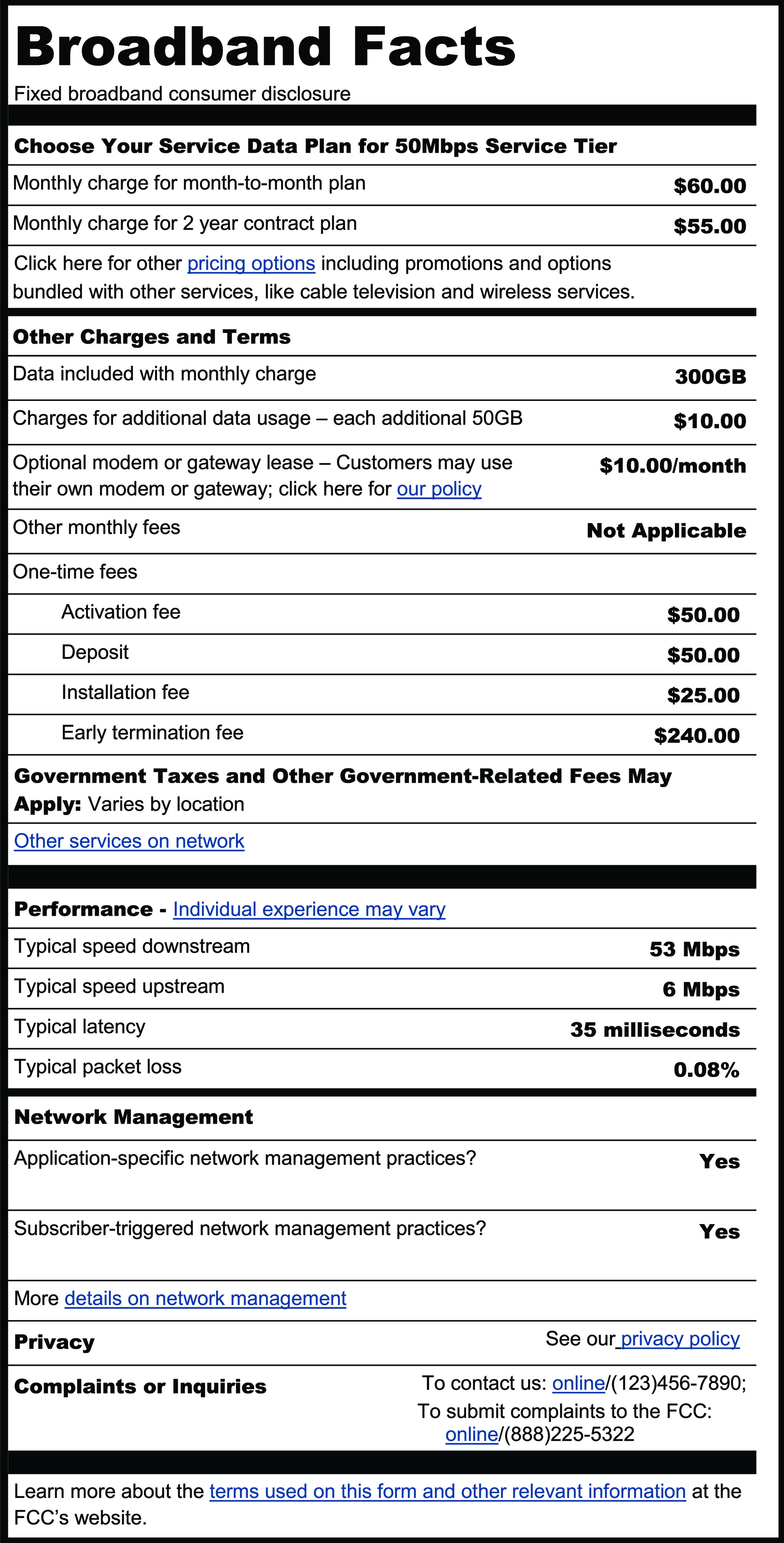 A sample label from back when the FCC first introduced these labels.
Credit: FCC

Typically, when you’re signing up to get that sweet internet juice routed into your house, your ISP of choice provides some basic information about the service. It’ll give you a maximum theoretical download speed and a monthly data cap if there is one, but you won’t really know how the service performs until it’s hooked up and ready to go. The FCC’s new order will require providers to assemble nutrition labels that may look an awful lot like what you see on the back of a box of cereal, but with useful information about their services instead.

It’s worth noting that the FCC first came up with this idea in April 2016, but at the time, ISPs weren’t required to adhere to the rule. We all know how eager companies are to follow rules they aren’t actually required to follow. Thanks to this new ruling, however, they finally are.

Here’s what you might expect to find on these labels, based on a sample the FCC accompanied with the 2016 announcement. The FCC doesn’t have updated samples yet, so some of this could be subject to change:

The final two points on that list are so, so crucial. It’s not that hard to calculate the monthly cost based on the scant information providers give you at the point of sale, but $100 for the first month of service can easily double or even triple when you take into account the costs of activation and installation. And anyone who regularly tests their internet speed knows that the max speed you pay for isn’t always what you get.

In fact, depending on your location, provider, and number of devices connected at a time, it might never be that fast. A previous apartment of mine was supposed to get 200Mbps download speeds and would frequently come in at less than 10 percent of that speed. Terrible.

Once ISPs start providing these labels, consumers will at the very least have a more accurate picture of what’s being offered. Will this fix the other myriad problems with internet in the U.S., like spotty service coverage in rural areas? Not on its own, though the FCC did commit $1.2 billion to rural broadband expansion in the same week. But soon, providers will no longer be able to mislead customers into paying too much for a service that isn’t nearly as reliable as it claims to be.

A little transparency never hurt anyone.